The latest class to graduate from the University of Pittsburgh Police Department's Citizens Police Academy made it through the 10-week course, and the dozen students came away with a greater understanding of the department and its role in protecting the Pitt community.

The recent graduates lauded the hands-on experiences, especially the simulation — or scenario — training, where students are confronted with real-world decisions that could have life-impacting consequences.

"The simulation training we received showed me just how little time the police have to react to certain situations," said Jennifer Phillips, an associate University registrar.  "... The CPA really helped me understand the dangers [officers] face, how little reaction time they have, and how quickly they need to make decisions.  One of the biggest takeaways from the CPA was how much training Pitt Police has to go through in order for a lot of what they do to become muscle memory.  Without the extensive training, they may be more apt to make mistakes or not handle situations properly."

Andre Lamar Wallace, a customer care specialist at Panther Central, said it was enlightening to learn "how transparent, vulnerable, and knowledgeable all the officers/instructors in the program are. With every class and topic, you could see their passion and dedication to being police officers."

Topics covered during the CPA include criminal law; firearms; traffic laws; DUI procedures; report writing; domestic violence; traffic stops; scenarios; and defensive tactics. While a trip to the gun range was canceled, students were given training in how to properly fire a Taser gun.

"The experience exceeded my expectations," said Carol Fortney, a teaching associate professor of chemistry.  "There was a lot of discussion in each class.  The classes were interactive.  From field sobriety tests to defense tactics, to tasers, to scenarios, every class was a new experience. The instructors were experts in the topics they covered.  All instructors welcomed questions and were approachable."

Like her other classmates, Fortney said the scenario training proved the most impactful.

"Being tossed into a chaotic situation that you are expected to resolve is something that most civilians will never experience but that a police officer can expect daily," she said. "As civilians, all we have to do in a dangerous situation is get out of the way.  The police officer must assess the environment, the situation, the threat, and the intention of the actor and then act, all in a moment. The scenarios provided us with a sense of the danger and the consequences of a wrong move."

A Learning Experience for All

The Pitt Police officers who took part in the classes said the class is rewarding for the students and the teachers.

"The most rewarding experience was seeing the class participants take a genuine interest in police work and their willingness to participate in all components of the CPA experience," said Officer Daniel Trimbur.

Lt. Brad Kiefer, who leads the department's Community Programs Unit and the CPA, said: "The engaging and thoughtful questions that were asked by class participants and the resulting conversations that took place. Learning about new trends and hearing from the class participants' prior experiences when they had contact with a law enforcement officer.

"During the very first Fall 2022 CPA class, I stated that I have learned something from every prior CPA class that I've instructed, and my hope is that I continue to gain new knowledge and that every participant also takes away something too," said Lt. Kiefer.

A Personal Touch, with HEART

The Citizens Police Program allows Pitt Police officers and class members to engage on a personal level and break down a few barriers.

"I've always appreciated police officers greatly but am often a little scared of them, especially when I'm definitely not going the speed limit," said Logan Seaver, a freshman. "That said, we had lots of human interactions with police officers, and I am really grateful to have gotten to know some of them a little better."

Two members of the latest CPA class, Katie Zeak and G. Alexander Sipe, are clinicians with the University Counseling Center's Pittsburgh Higher Education Assessment and Response Team (HEART), which partners with Pitt Police to provide an immediate response to welfare checks initiated by members of the University community to support students in distress.

Both said the class provided an opportunity to learn more about the officers and the training they receive.

"During the past year, my colleague and i have worked with Pitt Police day in and day out, so the appreciation was already there, but [there was] a better understanding" of what they do, said Sipe.

Going into the class, Sipe said he was "hoping it would enrich my understanding of the needs and priorities of the officers that we work with on calls on a daily basis, so that we can continue to deepen our abilities to interact and safely engage with students while on crisis calls."

For Zeak, the class was an opportunity to talk about the relationship between police and the communities they serve.

"Getting first-hand knowledge from officers at all levels in the department, as well as being able to have open and objective conversations about why fair and equitable policing matters" was important, Zeak said.

It's an important conversation for Pitt Police, as well.

Each officer in the Pitt Police Department receives Active Bystandership in Law Enforcement training, a program that is certified by Georgetown University and intended to increase police accountability.

Sipe recounted his own experience during the simulation exercises — which he called "eye opening" — and said the training is especially important given the situations police officers sometimes face.

The demands of the job, he said, "can challenge executive decision making" and makes it "clear the need for continual training and repetitions. I am happy to know that Pitt Police offers robust onboarding and ongoing training for their officers."

If you are interested in enrolling in the Citizens Police Academy, register online or contact Lt. Brad Kiefer at 412-648-4054 or bjkst19@pitt.edu 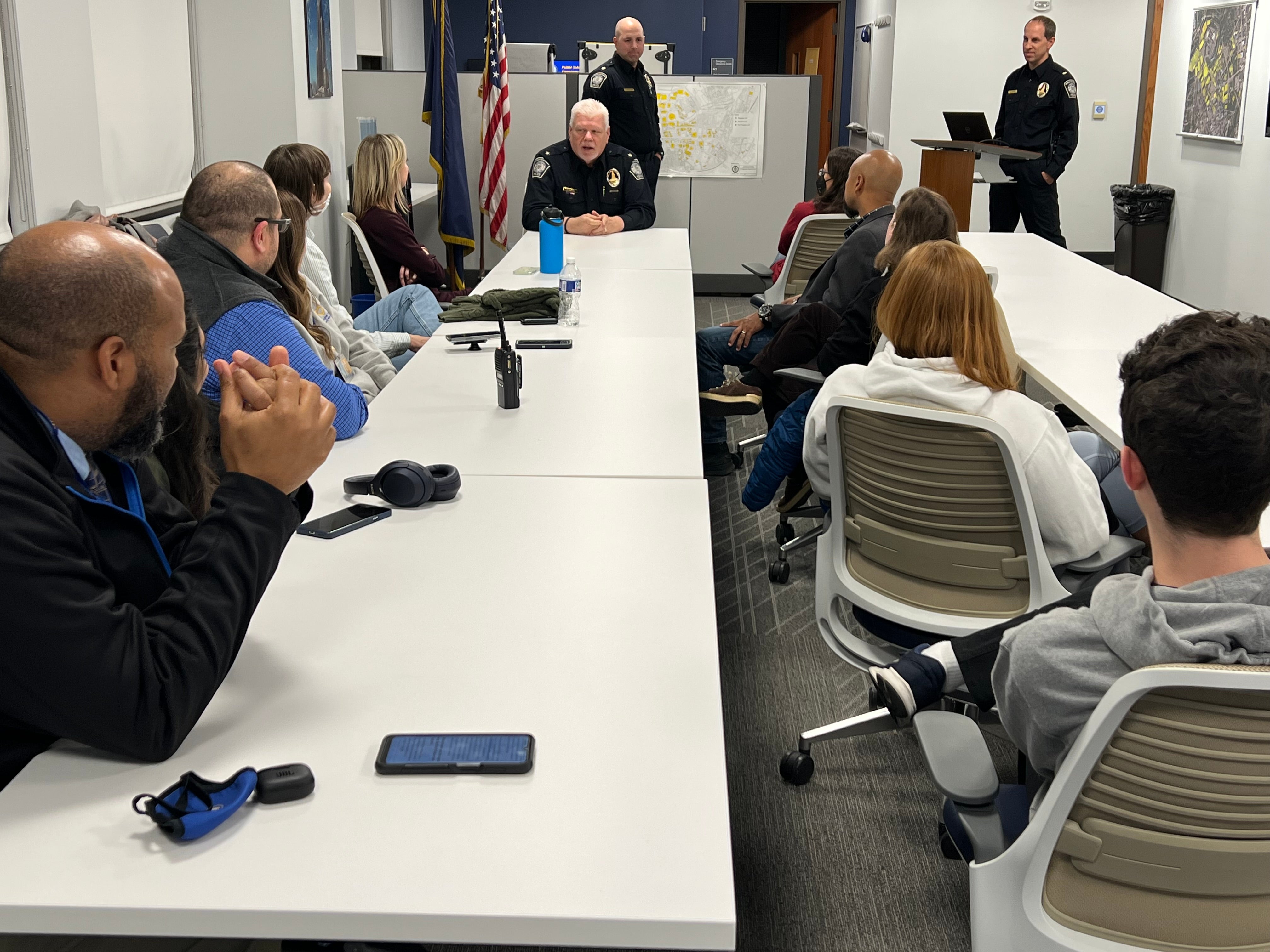 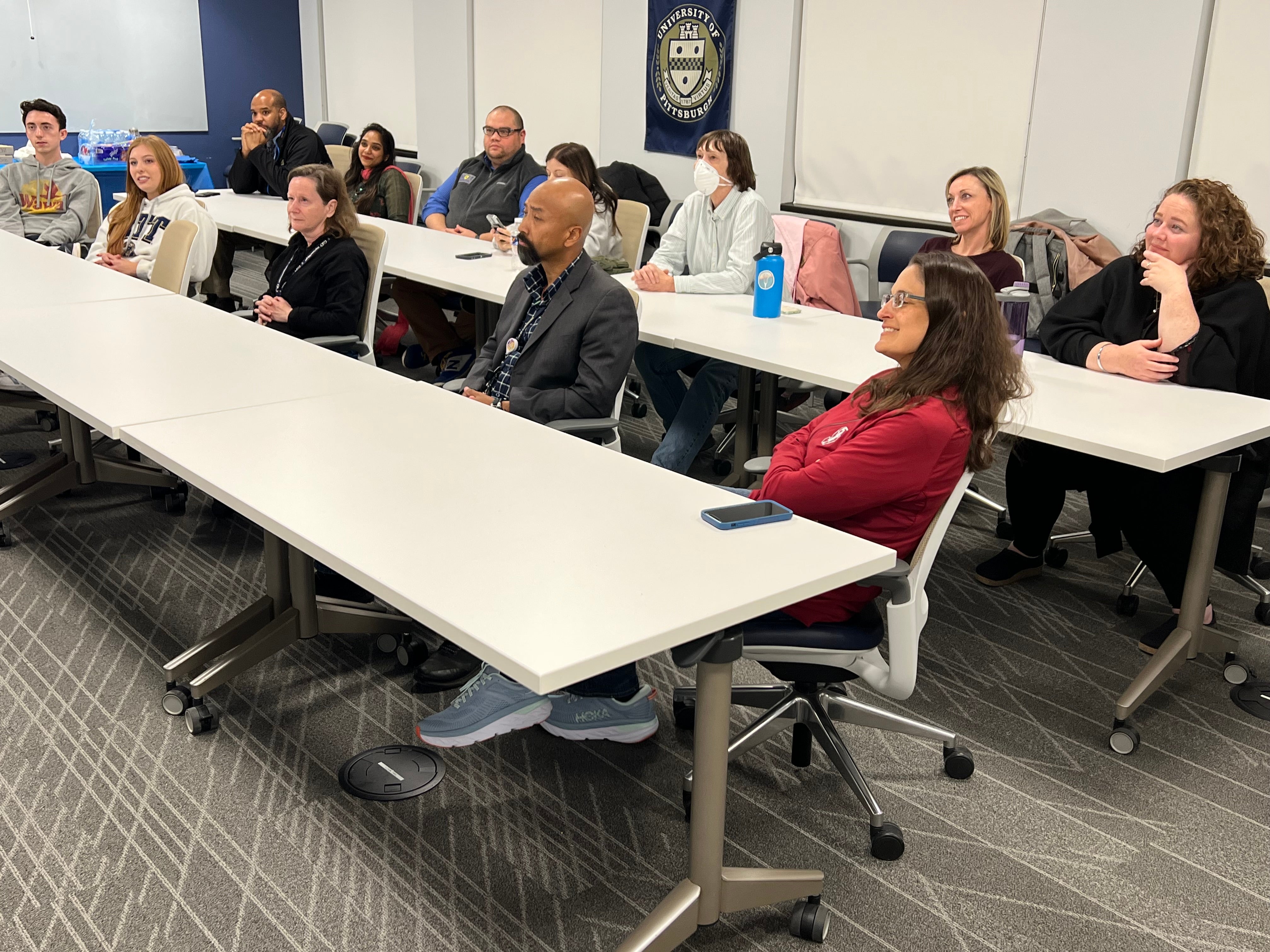 The class listens to a presentation on graduation night. (University of Pittsburgh) 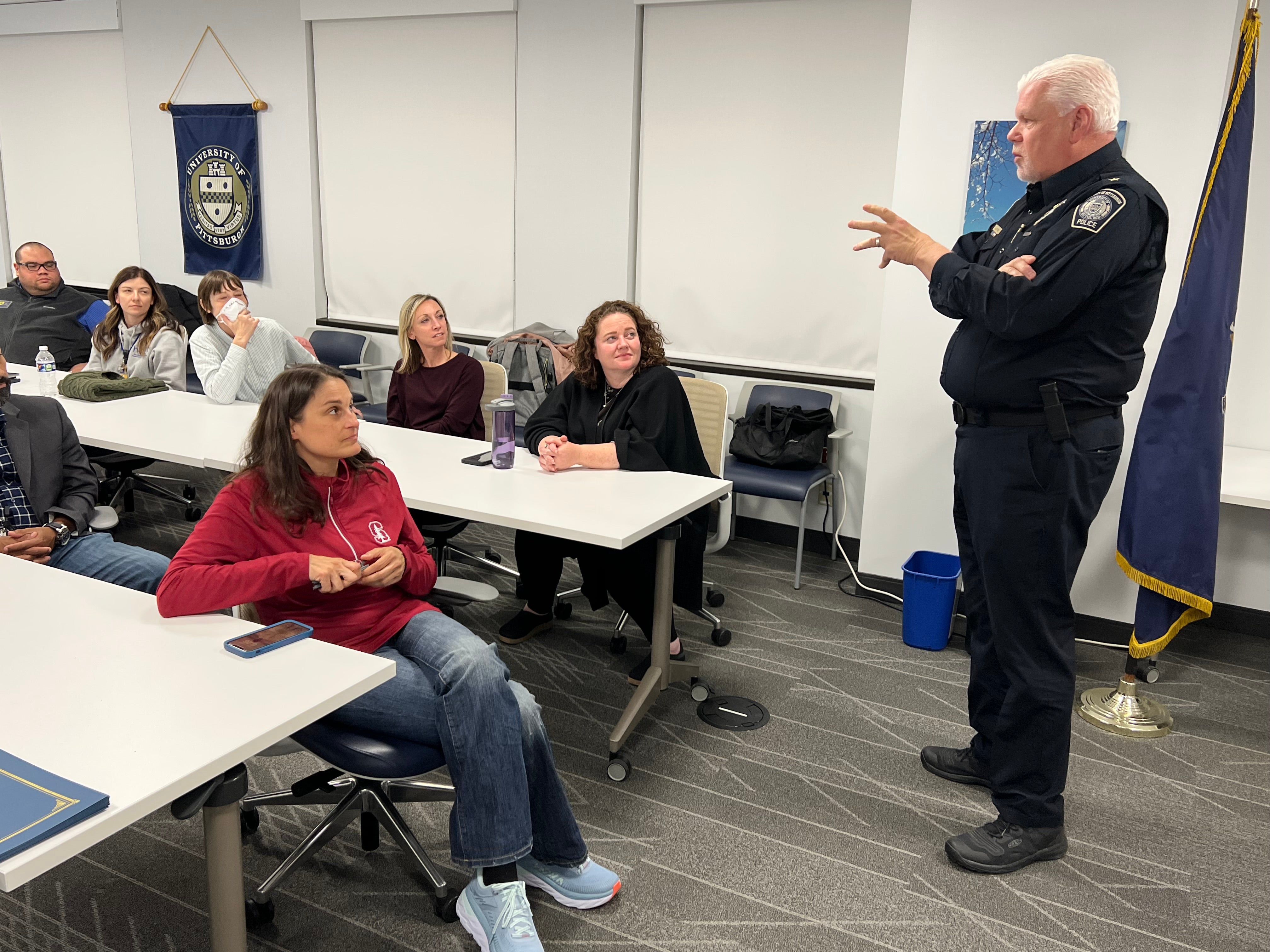