Rick Troy holds a statue of a the Pitt Panther. It was one of the parting gifts given to him during a presentation by Bob Chamberlain, the emergency director of the Office of Public Safety and Emergency Management. On the board behind him is a picture of Mister Rogers with the quote, "Yours is a job that cares."

A longtime University of Pittsburgh Police officer is trading "yunz" for "y'all."

Rick Troy, who turns 60 on May 3, is retiring from the Office of Public Safety and Emergency Management and heading to Austin, Texas, where he and his wife will be able to spend time with his son's family and soon-to-be first grandchild.

To say its been an earned retirement would be an understatement.

Troy started at Pitt in 1983, doing mainly custodial work — first at Scaife Hall and then for nine years at Heinz Chapel.

During that time working his full-time job, Troy got married, had a daughter, attended school in Oakland, and graduated from the police academy at Indiana University of Pennsylvania, which required him to be there three days a week for 10 months.

By 1994, Troy — who earned a bachelor of arts degree in Administration of Justice and Legal Studies from Pitt and a master's degree in Safety, Security and Emergency Management from Eastern Kentucky -- was a full-time Pitt Police officer.

"(It makes me proud) when I look at what I did in law enforcement," he said. "And my promotion progress. Starting out, and I hate to say it, cleaning toilets, then getting my education and my bachelor's and masters degrees, then police sergeant and then lieutenant."

After a long career, the time is right for a change, he said.

"I don't want to be the old lieutenant that hangs around forever," Troy joked.

With the Pitt Police, Troy helped establish the first Special Emergency Response Team and started the bicycle patrol division in 1996.

Still an avid bicyclist, Troy will be leaving his home in Bethel Park for a new homestead -- a Barndominium, which is a cross between a barn and a condominium -- in suburban Austin.

What he'll miss the most, he said, is the camaraderie he shared with his co-workers.

"The officers and guards and the sergeants I worked for," he said. "They're like family. You see some of them eight, 16 hours a day, sometimes seven days a week. I've spent more time wth some of the officers that I worked with than I did with some of my family members." 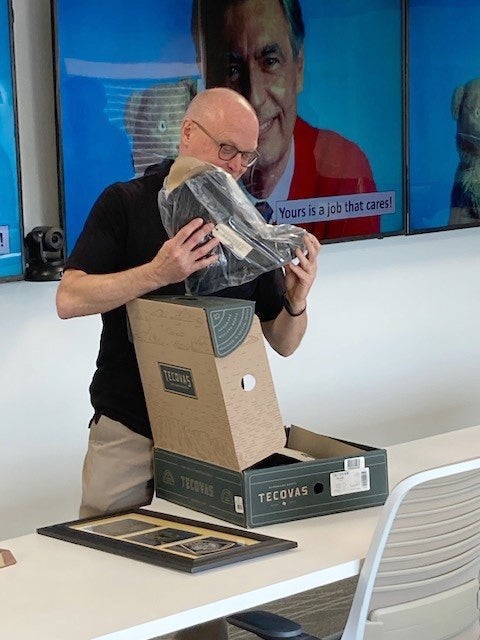 Rick Troy holds a new pair of Tecovas cowboy boots, a retirement gift from Bob Chamberlain, the emergency director of the Office of Public Safety and Emergency Management.

To help Troy adjust to his new life in the Lone Star State, Bob Chamberlain, the emergency coordinator at the Office of Public Safety and Emergency Management, bought Troy a brand new pair of Tecovas cowboy boots.

"I'm gonna wear them in my barndominium," Troy said, laughing. "I'll learn how to dance a two-step. I hear it's easy since it's only two steps."

Leaving Pittsburgh will be tough, but it's the right time and the right situation, he said.

"Pittsburgh is a comfortable place to live," Troy said. "When people are born here, they tend to stay here. I decided it's time for a change. "I don't want to have a 2,000-mile relationship with my grandkid."

Troy, who has since remarried, has a daughter from his first marriage and two sons from his second marriage with his wife, Diane.
In Austin, the Troys' barndominium will also include workspace.

"They have a nice work area, so I plan to keep some toys in there, like ATVs," Troy said. "I'll keep my son's boat in there, too."

Despite moving from Texas, Troy said Pitt will always be in his heart.

"Pitt's been good to me," he said. "I've never been laid off. Never been unemployed. My kids went to school (for free)."